Lessons Learned From The Layoffs 01 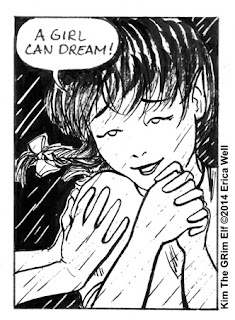 Last week I hit a crisis point where I really thought my dreams were just crushed and over.

But excelling at whatever one does lies in the ability to toggle back and forth from focusing in on the details and pulling back to see the big picture.

As an artist, I know this to be true because in order to paint a picture, I need to both look at the canvas at large and then the little pieces that fill it. When I draw a comic book page, I need to draw the picture up out of the page in stages, then also fit that page within the context of the story itself.

As an employee, we can have the luxury of one or the other -- being the details person, or being the big-picture person. But when one is self-employed, or running their own business, looking at both the details and seeing the big picture are crucial, even if you still have the "luxury" of focusing on either detail or big picture. I also think a great employee still has to think like an entrepreneur; in the sense that the practice of mindfulness in the details of one's position and how it jigsaw puzzles in with everyone else's in the company produces excellence in one's area; which further encourages better quality in everything else around.

So rather than see this latest situation as "Layoff #4" (over the past 24 years) I've learned (sometime back around layoff #2) to look at the big picture of how this all works within the framework of my own life story. This is a time to be dispassionate and not take things personally.

What do I learn from it?

Examining the 4 layoffs (soon to be 5 in May) I've personally been through, and the 3 I've been through with my husband, I've noticed 2 large, recurring themes or problems, (that have some small differences between companies):

The two are different, but both lead to the same thing -- layoffs and/or the company closing outright.

My husband and I had discussed Problem #1 even before we got married, because he'd noticed this too, even when he didn't yet know where I had worked.

Problem #1 was prominent in two of the seven companies, and secondary in a third. In this scenario there is a partnership where one partner had some cash, and the other had a great idea, and they said "Let's make a company!"

Without knowing the details -- other than cold observation as an employee -- in one of these examples it seems like one partner realized he wasn't going to get his money back in the time frame he expected, so he pulled the plug. In that first example I don't see it too much as the fault of the "vision" partner. In examples two and three, however, I plainly do see the vision partner really could have been more considerate about the budget and time frame involved.

Lesson learned? That old saying that Time is Money. If you're a partner and it's not "your money" you have to respect the money/time frame.

But even when it is YOUR OWN MONEY you still must respect the money/time frame issue. Just throwing money at a thing isn't going to make it automatically work out or be successful. This is why we have bosses and supervisors, which now creeps into Problem #2 territory.

Problem #2 will need it own post; because that addresses the whole larger issue of the delusion of there being better communication just because we have smart phones and social media.