A Bad Onion Will Just Kill A Dish 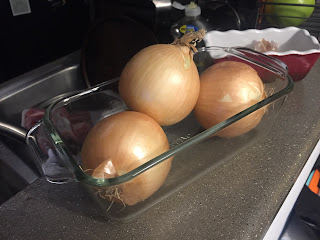 I was wondering what I was going to blog about this week, since I haven't gotten near any (now 3) of my book piles ... there'd be plenty to write about there if I had the time to read ... but working on deadlines is priority. Then I realized this afternoon, even as I wanted to cry over the epic failure of a dish, I thought at least being able to blog about the utter failure (IMO) might make me feel better.

Last week I blogged about my "fix it" obsession. And I guess to a degree my "fix it" obsession can be said to spread out to food. Maybe it's middle age, maybe it's the need to have something handy and ready to eat that's homemade (read: leftovers), or maybe it's just the sheer joy of cooking -- but I've really grown fascinated with (okay, easier forms of) cooking. I've been aiming to learn how to cook some of the Puerto Rican dishes my mom would make for us when I was growing up ... with the hopes that next time I visit I can impress her.

Today I'm making chicken stew. Or rather, I was trying to. We'll see whether it is in about an hour. Because like the title of the post headline reads -- a bad onion will just reduce a dish to uselessness.

I like yellow onions. They have personality. They're the ones you need when you're cooking Puerto Rican dishes. When they sauté in the cooking oil to become the base of just about every PR meal that is not a dessert, they are just heaven to breathe in. They smell like a meal unto themselves! Unless they DON'T, in which case you're in trouble. Real trouble.

I dunno if it was just an old one or if it was a sweet onion disguised as a yellow onion and I picked it up by mistake. ACK. All's to say, I didn't notice its lack of scent while I was cutting it up because I was too busy CRYING from the fumes!

But boy did I notice there was NO SCENT WHATSOEVER when I started to sauté them ... and did I start to freak out!

There's going to be no flavor in this stew! How do I save this dish?! I've had this happen before and because I was sharing that one with friends, the sofrito was simply thrown in the garbage for its amazing lack of flavor and I plum started over. But today I've got like 5 pounds of chicken that has to go in here! The kicker being I have NO MORE ONIONS IN THE HOUSE TO REPLACE THIS LAME ONE WITH! (I sure can't leave the pot to get in the car to get an onion. I'm on a deadline!!)

In my panic I grabbed small jars of minced onion and onion powder -- hoping that somehow one of these options might add that amazing--what do I call it? kick? piquant? tang? zip?-- add that flavor that makes the dish come to life.

45 minutes later:
the graininess has subsided. The flavor is mild so it's not inedible but the sauce has no real personality. It does not bring that note of nostalgic contentment to my tummy with its taste. Sigh.

How to salvage this. I might experiment with hot sauce (now I like hot sauce but it shouldn't be necessary in this dish.) How sad. :(

P.S. Friday afternoon.
The leftovers the following day were slightly better. The flavor just didn't pop. But oy, lesson learned. Always have back up onions in plenty supply. LOL