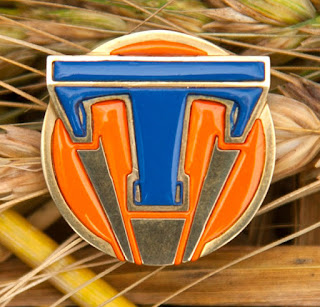 The AMC Movie Talk guys and gals (link here to star interviews but the review was on the AMC Movie Talk Show itself) were surprised Tomorrowland only made 40 million over their opening weekend.

My husband wondered if that was because the trailer we saw (Disney's official trailer #3, as identified on YouTube) showed the two heroes in danger but escaping to Tomorrowland ... thus implying the danger was kinda over. Chris didn't think it was plain enough in this trailer that the danger was far from over -- let alone that it was Tomorrowland in danger.

I however, kinda always knew Tomorrowland was in danger. I knew the robots chasing after Frank and Casey (George Clooney and Britt Robertson's characters) in the trailer were part of the root cause somehow. I wasn't sure why I thought that -- but I rewatched trailer #3 three times to figure out why.

It's in the words "Fight for tomorrow."

Fight for tomorrow. The phrase actually chokes me up.

I'll admit, it's a less than perfect film. I really disliked the way it started -- with Frank talking directly to the camera. Blech. I really didn't like that at all -- but boy, that paid off at the end.

It was also a little preachy -- the message is super-important and wonderful and necessary to be shared. Fight for tomorrow!! The presentation of the need to fight was sometimes a bit heavy-handed in its sharing and could have used subtlety here and there. But it's a keenly needed message.

In the movie, Casey shared a story with her dad -- one that he had told her often. Paraphrasing it, it was something about there being two wolves fighting. One is darkness and Despair, the other one lightness and Hope. "Which one do you think wins?" she asks him. Her dad answers, "The one you feed."

It is exactly a fight. Every moment of every day.

Which wolf are you feeding?