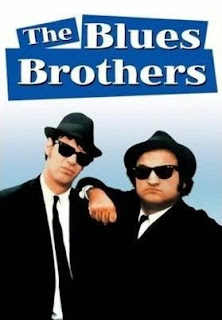 I watched The Blues Brothers for the first time this past weekend.

I've seen the church scene close to a dozen times over the years. It skates so close to the edge ... but it always gets me, and chokes me up. I've seen the Aretha Franklin scene where she sings "Think" probably a half dozen times ...

When Chris realized I had never actually SEEN the whole movie from beginning to end, he insisted we watch it this weekend. Holiday weekend fun!!

It was great to see the scenes in context.

I watched Elwood pick up Jake from Joliet. Then as they drove away in that crappy car, I felt inspired! And I suddenly so wanted to make movies!

I have a short list of movies that have inspired me to want to make movies.

The first one to do that to me was Time Bandits, directed by Terry Gilliam. And most of what Luc Besson has directed has done that. I watch the movie and I am inspired!! This is all probably a blog post unto itself ... but I am meanwhile basking in the happy inspiration ...