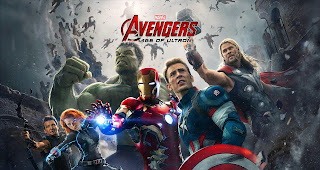 I love LOVE LOVE Avengers: Age of Ultron! Yes, better than the first Avengers movie. (Yes, I said it.)

I think the first Avengers movie introduces characters and sets things up really wonderfully -- but then Avengers: AOU really carries it through and you get to start to know and truly care for the characters -- ie., they are not one-dimensional. This past week to prep seeing Avengers:AOU a SECOND time (!) we watched Agents of S.H.I.E.L.D. re-watched the first Avengers, then re-watched Captain America: Winter Soldier and then went to re-watch Avengers: Age of Ultron. Oh my gosh, you just get your socks knocked off.  The T.V. show is GREAT -- and what an amazing bunch of films. Each film is successively better! They've truly made the best of these characters in translating them from comics into film. Wow.

That opening scene was stuffed full of gorgeously laid-out shots that looked JUST like comic book panels -- that was SOOOO exciting! LOL That director Joss Whedon would do that was just so special!! I was absolutely geeking out looking at it -- I was completely delighted by the visuals. I felt like I was 17 years old again -- relishing my first Marvel Comic ... Wow.

Look, I loved it so much we went to see it a second time in the theater -- and we've flat out never indulged in seeing a movie in the theater twice since we've been married, and that's over 13 years now. So this is a huge deal to me!

I love Joss Whedon's storytelling. Once Chris introduced me to Whedon's Buffy The Vampire Slayer and Angel T.V. shows, we have since really done our best to see the TV shows and movies he makes (okay, but I didn't watch his horror one -- The Cabin In The Woods -- because I'm just not a horror movie fan.) Whedon's a brilliant man, and blessed with the ability to have pulled these projects together (loved Dr. Horrible and I'm really enjoying the S.H.I.E.L.D. TV Show!).

Looking at the enormously long credits reel at the end of Avengers:AOU (& I'm a total production nerd: I stay until the very, very end of movie credits regardless of whether there's a tag scene at the end, just to see the sheer scope. Plus I wanted to double check that it was opera singer Maria Callas that Banner was listening to on his headset -- and it was!! YAY!) I know it must be so hard to wrangle all the logistics necessary to have pulled this off and done it SO incredibly well! Between that and for the Marvel Comics guys to oversee all the movies to make them a cohesive Universe/whole ... Thanks to all of you ladies and gentlemen, for teaming up and making it all work out for the greater good and our great enjoyment!

Y'know, there came a point where I was just suffering comic book burnout. You can only go so dark for so long in a comics universe that's supposed to be made of heroes .... until it just burns out your desire and enjoyment to even read them.

I mean, heroes should be heroes. That's why we dream of them and of being like them and make stories about them so constantly and consistently. Do they have human flaws? Sure, of course, but they're striving to be bigger than the flaws, better than the flaws, and they're trying to survive and overcome the flaws. We so need to see that!

Thank you, Mr. Whedon, Mr. Feige and every single one of you ever named on all those Marvel movie and TV Show credit reels -- all of you for keeping the Marvel heroes truly heroic. Ya'll have done a beautiful job!