One of my uncles passed away last month; he was the latest in a string of uncles who have died in the past two years. Until now, however, it had been my mother who had lost siblings.

Mom had 9 of them, and many had been ill over several years. I think she's down to 5 now ... maybe it's 4 ...? The terrible thing is I'm not actually sure, because they all mostly live in Puerto Rico and I've not met the bulk of them. Or if I have, it was when I was a little kid. Aside from the 3 sisters of hers that I do remember meeting (gracious, and they all look SO related!) I don't actually remember meeting any of her brothers.

When I was younger that was just the way it was. Communication between far away places was difficult. Long distance calls were pricey. Plane tickets to go visit were a luxury. I have a good idea of what it's like to have left "the old country" ... and that some never looked back is amazing for the sense of loss. It's only now that I'm older that it makes me sad to not have known these aunts and uncles. I know technology is supposed to help ease that for future generations, and I hope for their sake it will, but I still find it sad. Camera-time is not the same as in-person time.

The uncle that passed away last month was my Dad's brother. He was second-oldest. They both had gotten sick enough that neither was able to travel to visit the other for close to two years, and they only lived a state away from each other. This is the first sibling on my father's side to pass away, and it was pretty shocking, because they had all been tightly-knit. This is an uncle I actually knew.

When we were all small, 4 of the 5 siblings stayed in the NY area, and we visited each other regularly. Once us cousins all got to be 16 - 18 years old, though, there seemed to be less time for bigger family gatherings. And once cousins started to get married, forgeddaboutit. I still haven't met most of my cousins' children (9 and counting, I believe it is ...). It's pretty shameful. Some of us moved out of state, and visiting each other, well, really just became a thing of the past for most.

What struck me about this uncle's passing were two things; the first one was my father had visited his brother a few years back, when his brother was still healthy, and they'd had a lovely conversation. My uncle had made dinner, and they had a wide assortment of desserts. The wives had fun catching up, and they'd all had a great time.

Later my Dad expressed surprise at how he wished he had spent more time with his brother in a comforting, big-brother way. Their mother had died when the 5 of them were all under the age of 13, and my Dad was left to take care of the other 4 in the shadow of an alcoholic and mostly-absent dad. While they were growing up, since this brother was second oldest, my father took for granted that this brother would also be mature and look out for the 3 much younger siblings, like my dad was doing. He told my dad he would have liked more big-brother time. That honesty was a good moment to share.

The second thing that struck me was a conversation I had with the husband of my father's sister (my aunt is mostly mute because of a stroke.) This uncle had been best friends with my blood-uncle, and we reflected on how ill the 3 siblings had been for the past few years. In light of the illnesses the 3 had been going through, no one, however, expected this brother to be the first to go. He was the strong and brave one; the beautiful, dark-haired, caramel-colored, tattooed brother with the ability to fix any car and put in a new kitchen if you just asked. He was the quiet one that didn't say much but people figured would always be there. He had been the invisible one.

Who are your invisible ones?

Email ThisBlogThis!Share to TwitterShare to FacebookShare to Pinterest
Labels: Life

To Teach: The Journey In Comics by William Ayers and Ryan Alexander-Tanner 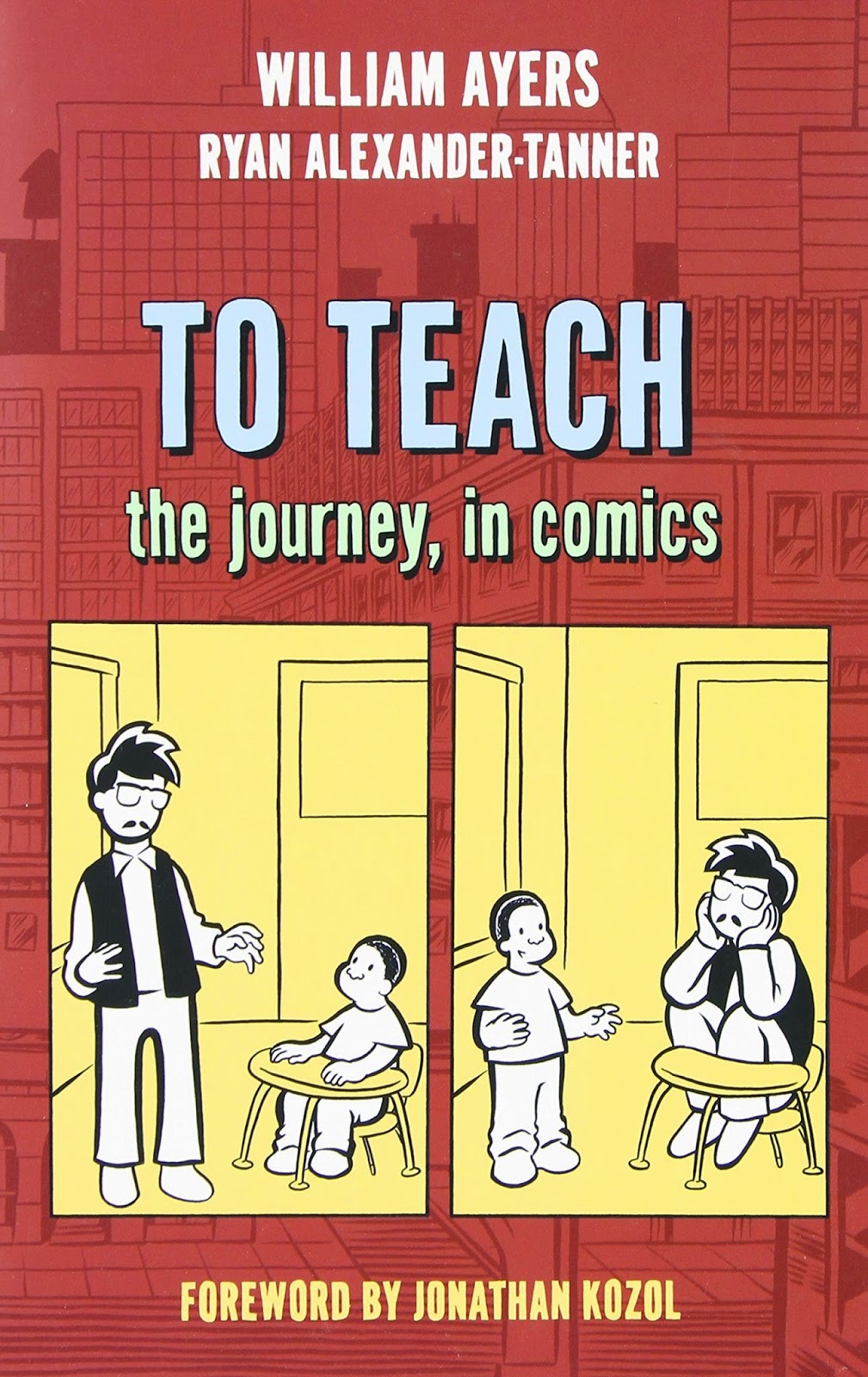 We get a lot of Divinity School students -- folks studying to become ministers -- over at church. One day it came up in conversation that I draw comics, and one of our members mentioned how one of his divinity school friends was reading a graphic novel in their class. I HAD to know what it was. What kind of graphic novel would they be reading in divinity school?? Fortunately the school mate was visiting that day, and I immediately sought him out, introduced myself and asked what the book they were reading in class was, and he told me "To Teach: the journey, in comics".

Kind of an essay, with a little bit of memoir, To Teach is a book written by a teacher for those who love to teach and have the heart to learn how to serve those who wish to learn. It's quite simply, a beautiful little book. The writer is a kindergarten teacher -- and the story pours from the perspective of a person who really enjoys the process of teaching little ones, big ones, and himself.

On his first day of school Ayers is peppered by the questions of his 5-year-old students: "Why is the sky blue?" "Why does the ball bounce?" "Why is your skin pink and mine brown?" "Why did my dad have to go to war?" The questions are the moment. The questions are what we ask, what we want to know ... it's what makes teaching so beautiful, irritating, magical, exhausting, energizing ... it doesn't matter that these are five-year-olds asking -- they have the same questions we all do, at every age. And Ayer's big question is: "What is a teacher and what is teaching?"

Yes. "What is a teacher and what is teaching?"

Is teaching giving extra help to the child who is in need? Labeling the kid who doesn't act quite the same as everyone else? Is it debasing individual kids into piles of faceless national percentiles of abilities and achievements? Is it applying standardized tests to children who are not standard, because there really can't be just one standard across a country as large and as varied in its makeup as America (which is kind of the very point of her? Yes, I did just have a soapbox moment there. My apologies. Back to the book.)

Reading/seeing Ayers face school system bureaucrats who don't understand about students' growth, who don't get that the constant interruption of a school-wide intercom can be really CREEPY and see them interfere with methods that work because they just "don't understand" because they weren't taught that way (oh yes, the irony, right?) was nail-bitingly frustrating.

I LOVED the journey of this graphic novel. It is an adaptation of a textbook Ayers had written -- but I think it fits the graphic novel format wonderfully. It is a thoughtful reflection on the process of teaching and becoming better at it. And it's adorably drawn by Ryan Alexander-Tanner.

Chapter 7 opens with a terrific quote I will share in part here:


"Teaching is the vocation of vocations, a calling that shepherds a multitude of other callings. It is an activity that is intensely practical, and yet transcendent, brutally matter-of-fact, and yet fundamentally a creative act."

I think that's a rather lovely observation.
Posted by Erica Well at 6:01 PM No comments:

I've been negligent in thanking the various wonderful cooks who share their great recipes and help make cooking so much fun!

I'll aim to thank them more often ... I need to start by taking pictures of the food I make from their recipes and posting them. I tend to forget to take the pictures and just eat! LOL

First I want to thank Hilah Johnson over at HilahCooking.com for her many great recipes, (including for meatball and hummus) which have just made it easy for me to overcome a minor fear of cooking things because sometimes recipes seem too complicated. Hilah makes cooking look fun and easy and I highly recommend her videos and her recipes (I totally have to buy her books now!) Because I remembered to take a picture this time, I have to thank Hilah for the deliciously yummy No Knead Bread Recipe, which is super-low on yeast, tasty and SO AMAZINGLY CRUSTY!! (This bread either buttered or with a jam on it is LOVELY!!)

I LOOOOOOVE this bread. I've made it several times so far it is so enjoyable. I am at last posting a picture of one of them before it is devoured! Yes, it is an investment of time to make this one -- don't freak out -- because since the yeast level is SO low, you have to let the bread rise overnight before you can bake it, so you need to build in serious prep time.

But oh my goodness it is SO worth it!

Another terrific recipe and cook I want to thank is Angela Kim over at TheSquishyMonster.com for her Monkey Bread Recipe. OH. MY. GOODNESS. Another great recipe!

We had a friend visit this past weekend who suggested we make Monkey Bread.

She'd never made it and neither had I (!) so we had to find recipes online ... it being one of Chris' favorite breads (that I have postponed learning how to bake) I thought, well, okay, lemme finally look for it! It'd be really nice to know how -- if it'll taste good.

Fortunately, Roku has a CAKE CHANNEL that we just recently added!! And there was Angela, in the "New" section, with her Monkey Bread recipe video, God bless her! YAY!

I watched the video (several times) to get comfortable with the process. I liked the recipe ingredients and felt yeah, this is worth the effort, because this again, is another bread where you need to build in almost two extra hours to let the dough rise (twice).

Oh my goodness, was it ever worth it!!

I highly recommend a visit to these ladies' sites and to print out their recipes and try them out. Especially if you enjoy the cooking/baking process, you will definitely find these delicious foods worth the effort invested and they will become family favorites!
Posted by Erica Well at 1:13 PM 3 comments: