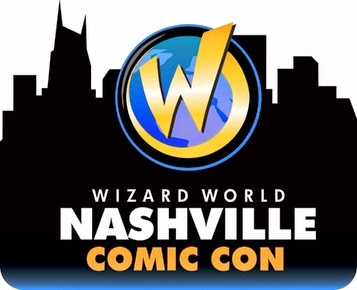 In 2013 Wizard World started a comics convention in Nashville. We've had smaller comic cons here, but they were definitely more comics/anime/and games centric. But nothing as consistently high profile/looks like big money gets spent/more general entertainment encompassing as what WW seems to present.

Tennessee's location in here in the mid-south makes it very easy for people from several surrounding states to get to us (OK, LA, AL, GA, SC, KY, IL for starters). We have loads of brand new hotels in the downtown area, and we have that new, beautiful, fancy-pants Music City Convention Center, to host it in, too!! So it seems a prime spot to start a major comics convention in. (Especially if you missed DragonCon over in GA!)

I'm super interested Wizard World showed up to start the big-name Convention hosting here. Never been to a Wizard World Con ... I do like what the New York Comic Con folks do -- been up for a couplea those. Can't go to this year's, but hope to again, 'cause they put in a good show.

Meanwhile, locally next week over the September 26-27-28 weekend, Wizard World will be in Nashville. Time to check them out.