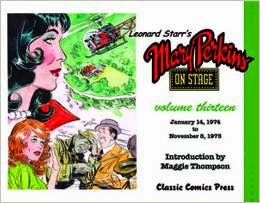 I devoured this volume in about 3 days. I started on the first storyline Thursday night, the 11th.

This is the 13th of 15 volumes in the set. Usually I read Mary Perkins On Stage a little bit at a time. Evenings after dinner. Sometimes in the morning as I drink my coffee. Lotsa times I'll read a nice chunk on Sundays. I love Leonard Starr's artwork, and while some volumes have been more interesting than others, the comic strip has overall been a really terrific read. It's very much a soap opera, centered on Mary being an actress, so she gets to meet all kinds of people -- from drama queens to mobsters. Sometimes the changeover from storyline to storyline is so seamless that I continue just to savor the smoothness of the transition!

It was a hard work week, my September 8 - 12 was. And a bit frustrating in spots. I was exhausted by Saturday. And Saturday, as much as I had wanted so much to finally put schoolwork aside and draw another page of my own new comic strip, I was just tooooooooo tired. I really could only just sit down and read my Mary Perkins. And boy, did I!

It was worth every lovely minute I spent curled up on the sofa. This particular volume had several story lines or a story ending I didn't quite expect, and that was that so much fun!

From a "did she or didn't she?" involving a now-grown-up starlet's reputation, to a "did he or didn't he?" involving Mary's husband, Pete;  to a Mom's sacrifice for her kid (and loads of other storylines in between) this truly was an exceptional volume for Mary Perkins On Stage!