One Sunday-Sized Best Mann For The Job Comic Strip


So several years ago, (oh my gosh! I just read our copyright date -- it's FIVE years ago!!) when Chris and I decided to do a comic strip adaptation of a novel we were co-writing called Best Mann For The Job (the comic strip taking place post the novel's events) we deliberately decided to make it a b&w daily, sans Sundays.

That decision was driven by several factors: First of all, I don't know how to computer color. Second, I don't love the way computer color looks on Sunday comics, and third, even if I'd been willing to give it a try to see what the outcome would look like, we couldn't afford to hire someone at the time to computer color them (that was before I started teaching part time. Which is why it's suddenly FIVE years later and I am terribly surprised.)

Chris and I had discussed and decided to make the Sundays stand alone, kinda like in a The Heart of Juliet Jones comic strip kinda way. Stan Drake had left his Sundays storyline separate from the daily storyline until 1965, according to Syracuse University, who keep his papers archived. (Bless you, Syracuse!!) Anyway, the idea was that whenever I got around to drawing them, we could just pop them into the Sunday slots, and/or we could opt to print them in their own book if we decided to pursue the BMFTJ comic strip further. Chris wrote about 20 or so Sundays that I promptly filed in a 3-ring binder and shelved in one bookcase or another for the past 5 years. Sigh.

Since I finished adapting the A Church Called Graffiti graphic novel, (and we're still figuring out what the next step is with that. Oy vey!) I decided I really needed to get back into some kind of regular drawing of comics. Although I do have a graphic novel I'm desperate to start on, it requires some preliminary visual research. Having just spent 7 years laying out, drawing, inking, lettering and scanning one giant-sized book all by myself (I had help in paste up, thank God. But Graffiti is 269 pages long!) you can probably guess I may not want to delve into such an arduous process of drawing a new graphic novel right away. (I'll get to it, but when I do, I think this time I will letter by hand and release the next graphic novel page by page as I draw it.)

Comic strips being my favorite format, I thought "lemme see what I have on hand I could work on" so I could get back to a Saturday-upload-comic-strip routine like I had when I was drawing my The Miller Sisters comic strip -- GASP -- back in 2009. (Dang. It's really been too long.)

So a month ago I dug up two ideas I had literally shelved -- these Sunday Best Manns and another story that's been noodling in my brain since High School, which is one that was all in scattery notes not yet written up sequentially. In fact I was hoping today would have been the debut day of the comic strip I chose to regularly post -- but it took me a while to decide which one of the two to choose. I had to actually start drawing them both to be able to pick one.

So above is the one Best Mann Sunday strip I drew. And I've opted to develop the other. With this second story I'm actually doing something completely new, and quite different for me. Here is a sneak peek at a panel from strip #2 below. It'll debut online sometime within the next month, so I will post with the link when I do. 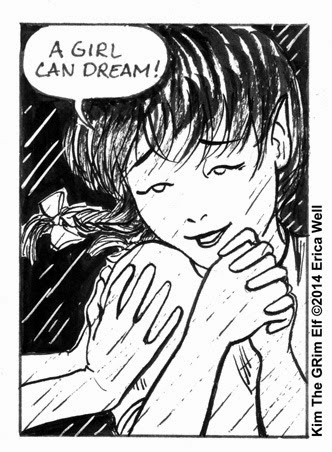