Odd how it took moving from New York City to Nashville, TN for me to get an assignment to adapt and illustrate a graphic novel based on the memoir A Church Called Graffiti, written by Taylor Field.

Taylor is the pastor of the East Seventh Street Baptist Church located on Manhattan's Lower East Side, close to Tompkins Square Park. The church has been called Graffiti from the get-go.

This month Taylor and his family are celebrating 25 years of serving the church and ministry to the neighborhood, so to me, it's appropriate to launch previews of the graphic novel to celebrate that. I found Taylor's story really touching and wanted very much to illustrate it, in order to share the oddball church experience that is being a Christian in New York City. It's a beautiful story, and I hope you'll read the previews online at Titletrakk.com. We'll update weekly there, usually adding 2 pages at a time, until an entire chapter is up.

1967 Bedazzled, Department S and After the Fox all on DVD 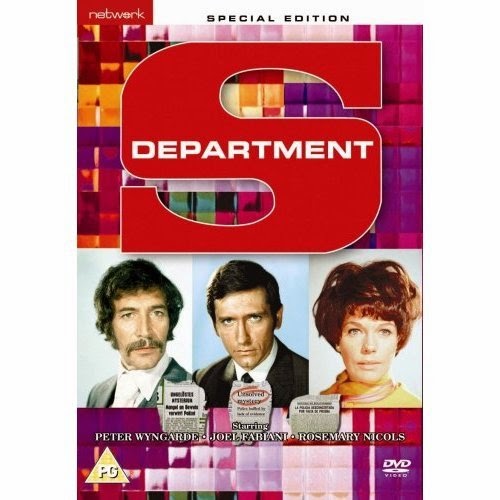 While I'd been off the blog, I've been enjoying a great plethora of oddities thanks to Netflix; among them the 1966 movie After The Fox starring Peter Sellers, the 1969 British TV show Department S and the original 1967 Bedazzled starring Dudley Moore and Peter Cook.

I've watched Bedazzled at LEAST a half dozen times by now, partially because of its absolutely great soundtrack. And we often skip to our favorite scenes, besides -- especially "Love Me/Bedazzled" where Dudley Moore and Peter Cook play "pop stars on TV" and sing those two songs. We finally bought a copy of the CD, which had been recently remastered, and now I play that almost every day while I draw or at least at night before we go to sleep. The opening theme I find especially hauntingly gorgeous -- and love watching the Maurice Binder credits!

I get obsessive with really good soundtracks -- I had the same obsession/buy watch/listen the DVD & CD with Ed Harris' Pollock movie -- so I've been enjoying Bedazzled a lot. Bedazzled turns out to be a variation on the Faust storyline, which also fascinates me ... I'm intrigued by the wisps of spiritual insight mixed within, so I hope to add a DVD copy to the Well library soon ...

I enjoy Department S and we bought the series first way before we got the soundtrack a couple of weeks ago. Their incidental music is just terrific. We're heading for the After the Fox CD then DVD next. The opening scene music and the song that runs over the After the Fox (more Maurice Binder) credits -- sung by The Hollies (AND Peter Sellers!!) -- are WONDERFUL! Looking forward to playing that music while I work ...
Posted by Erica Well at 10:16 AM No comments:

I finally bought a copy of the Icon TPB two weeks ago.

For me there's a lot of emotion wrapped up in these pages. Milestone was my first comics production job. When the first 8 issues of Icon was first collected and published a couple years ago, I flipped through a copy of that (and of Static Shock) at Rick's Comic City and the jewel-tone pages jumped out at me. Each image carries vivid snippets of memory.

I remember Noelle and Jason painting these pages ... Dwayne walking around the offices and guiding us all in how he wanted things done. He was just an incredible Editor In Chief ... I remember the gorgeous pale wood floors in our production loft-style offices ... the sunshine streaming in, the photocopier machine running and the scent of coffee ... soft-spoken Derek running the budget numbers in the corner office ... Mark Bright popping in and finishing up Icon pages and even occasionally using me as reference for poses for Rocket. Dwayne giving me pointers on how to do the paste up ... I can remember handling each gorgeous page at my desk ... and how I LOVED using all the (now super old-school) tools to prep and paste up the lettering. I had no idea what a fantastic and challenging span of time being at Milestone was going to turn out to be for me. It was one of the very few bright spots during my 20s.

Co-writing Icon #7 was my first real creative break in comics publishing, thanks to our editor Matt and thanks to Dwayne. It was supposed to be kind of a fill-in issue; a writer had been scheduled to help us out. We'd fallen behind -- which is only natural when you have the bosses running the publishing business and also directly creating the work to be published! It was an incredible load Dwayne had to particularly carry because he was our EIC and he was guiding everybody and also writing.

I remember that Friday the fill-in writer faxed in her script, which turned out to be really long and went in an entirely different direction than what they needed, and we were all filled with dismay. I mean, Dwayne.just.didn't.have.the.time.to.do.this. for crying out loud! And the rest of us knew we were SO going to get crushed by the cascading RUSH to help keep the deadline and it would mean fast, fast work and late, late nights. But that was all part of the excitement and exhaustion of publishing comics ... it helped that we were all so young and had the energy and determination to work as a team and pull it off.

I was at my desk and listened to the hub-bub. That evening we left and several of us spoke on the way out. At the bus stop I talked with Matt and asked him something like, so what did you guys really need to happen in this issue? And he answered something like, ultimately we need Rocket to make the decision to keep her baby. I looked over at the traffic and down at the sidewalk as I thought of what he said ...and ping!

I looked up at Matt and his blond angel-halo 'fro (he wore his hair long in those days.) I said something like "Can I try it? Can I bring you a script on Monday? I have an idea."

He said yes -- at this point we were so squeezed it couldn't hurt. They all had too much to do over the weekend as it was.

I brought in a script Monday morning. Anxiously waited for Dwayne to return from behind the closed door to his office ... and when he popped back out into the production room he told me he'd buy it. He's have to heavily edit it -- so now the dialogue is all different and he added the last scene -- but the skeleton of what I wrote is still there. I don't remember if right then I jumped up and down in glee or not, but I hope I did, 'cause that's what I felt. And I felt happy because I felt like I'd helped out Dwayne in the crunch.

I'd put off buying the Icon tpb 'cause I always figured eventually I'd be able to afford to fly out to San Diego Con or Dwayne would fly out and we'd see each other at NY Comicon and I would buy it then and have him sign my copy. And I would tell him yet again, how deeply I appreciate his love for the comics medium and how glad I am I got to work at Milestone and that he'd been my boss. I'd already told him all this several times by email, but you know, it never hurts to say thanks often to someone who had such an impact on you and in the field you love to work in.

I didn't get to have Dwayne sign my copy. So now I look at the tpb and read its pages and feel the weight of all the memories of working at Milestone as I flip through those jewel-toned pages. And I'm grateful for learning the lesson of truly loving the work you do, and especially grateful for working with someone firsthand who truly did, because that's most important if you're going to spend all your time in comics ...

I love the deep respect and absolute love Dwayne had for the work he did. It shines through the excellence in his comics and animation stories and through the work of those under his editorial/production guidance. To me that just shows the real respect and love he had for the characters he worked with, a love and respect that's very rare in comics publishing.

I miss that great gentleman. Dwayne was a giant not just in stature but also in character.
Posted by Erica Well at 9:59 AM No comments: 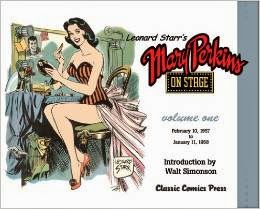 Chris and I have started to collect the wonderful trades being published by Classic Comics Press.

in the paper every once in a while back when I was a kid ... but it was such a sophisticated comic strip I couldn't handle it (hey, I was what, 10?) I found it beautiful to look at, and kept returning for that but the storylines themselves were just way over my head ...

Now that I'm in my 40s and can appreciate the interesting, adventurous and romantic entanglement (etc.,) storylines. What an great comic strip! I must repeat: I. ABSOLUTELY. LOVE. LEONARD STARR'S MARY PERKINS ON STAGE!!

We've caught up with the run and are looking forward to the rest of the volumes!

Posted by Erica Well at 9:43 AM No comments: