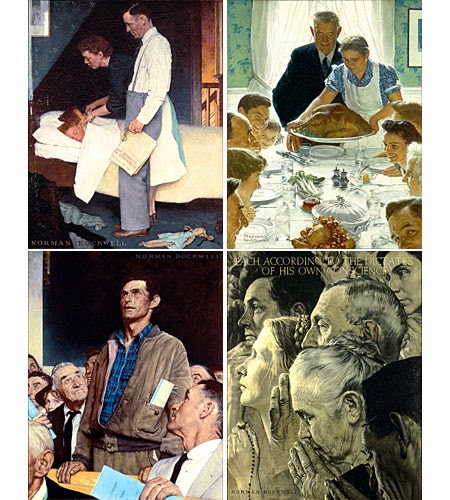 Many years ago, a dear friend (twice!) drove a small group of us over to the Norman Rockwell museum in Stockbridge, MA. (There is also one in Vermont.) It was a fantastic trip. (I bought a felt hat shaped like The Cat In The Hat's hat ... I think I still have it somewhere ...? Good times. Good times...)

Even if the man's painting style may not be to everyone's taste, there is no doubt Rockwell was talented and was a man well-placed in his time period. The man could DRAW. Me, I love Norman Rockwell. He's one of my favorite artists.

In the midst of my fretting over the drought, reading online news and replies on whether or not it's a good idea to pray for rain (clearly "praying for rain" is not for everyone, but I do expect Christians to understand the urgency to pray) then further fretting about national political situations and then the ugly housing/mortgage fallout, a series of Norman Rockwell's came to mind. One called The Four Freedoms. Rockwell painted them based on a speech to congress made by President Franklin D. Roosevelt on January 6 1941, during World War Two. The Four Freedoms that Roosevelt knew we were fighting for were:

"...In the future days, which we seek to make secure, we look forward to a world founded upon four essential human freedoms.

You know, I still do regret that we never did study much of U.S. History in school. I am no politics geek, by any means, but thanks to Nashville and its super community, I'm becoming more civics-minded in my old(er) age (LOL). Tennessee's reputation as the "Volunteer State" is amazing to me; this is good. This is proactive.

But do imagine my GREAT surprise when I googled the speech for this post, and found the last four paragraphs:

"That is no vision of a distant millennium. It is a definite basis for a kind of world attainable in our own time and generation. That kind of world is the very antithesis of the so-called new order of tyranny which the dictators seek to create with the crash of a bomb.
To that new order we oppose the greater conception -- the moral order. A good society is able to face schemes of world domination and foreign revolutions alike without fear.
Since the beginning of our American history, we have been engaged in change -- in a perpetual peaceful revolution -- a revolution which goes on steadily, quietly adjusting itself to changing conditions--without the concentration camp or the quick-lime in the ditch. The world order which we seek is the cooperation of free countries, working together in a friendly, civilized society.
This nation has placed its destiny in the hands and heads and hearts of its millions of free men and women; and its faith in freedom under the guidance of God. Freedom means the supremacy of human rights everywhere. Our support goes to those who struggle to gain those rights or keep them. Our strength is our unity of purpose. To that high concept there can be no end save victory."

This is worth meditating over, and scrutinizing.

It is applicable to today, and it may NOT mean the easy answer some people may think it does. It is, however a call for Justice.