My VERY first comic book fan letter (back in the day!) was written to Mike Baron and Steve Rude, the writer and artist team of the gorgeously drawn and intriguingly written Nexus comic book.

That was the very first indie comic I ever collected.

["Indie comics" are comic books published by younger and smaller publishers that are not owned in any way by "The Big Two"; Marvel Comics (Spider-Man, Hulk, Fantastic Four) and DC Comics (Batman, Superman, Wonder Woman).]

I like collecting art books, and collections of art by favorite artists ... but I'm not a big sketchbook fan ... until I got the Steve Rude newsletter a few weeks back letting me know they were putting together a Steve Rude sketchbook just in time to ship when they all got back from the huge San Diego Comic Con. 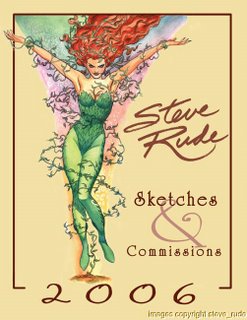 Chris saw the look on my face.

So I ordered my first sketchbook.

Full of "thinking" sketches and commissioned artwork, I'm enthralled by his art. This man can draw.

The sketchbook is a lovely addition (and incredibly affordable at $20!!) to the art library, and a bit of comfort/art fix while I anxiously await the start of Mr. Rude's latest comic book mini series on his new character The Moth.

Email ThisBlogThis!Share to TwitterShare to FacebookShare to Pinterest
Labels: Comics